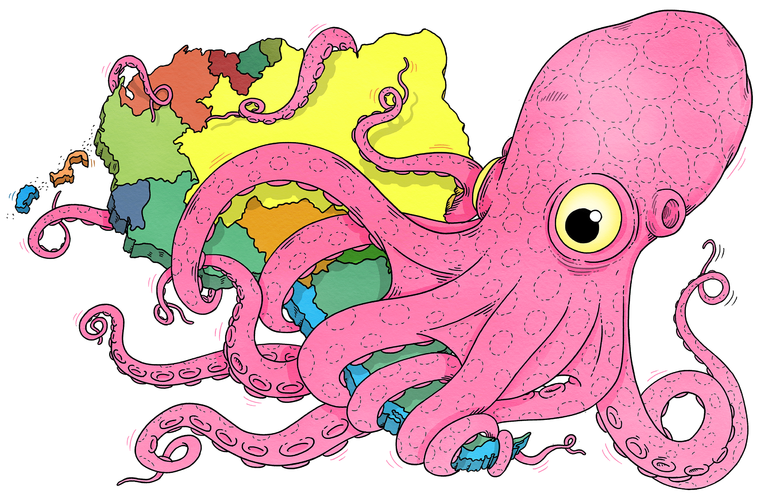 As the rogues’ gallery of fallen world leaders grows, you might be tempted to conclude that ours is the most corrupt era in history. Early last month, the former South Korean president Park Geun-hye was sentenced to 24 years in prison and fined $17 million for bribery, extortion and abuse of power. That same day, the former South African president Jacob Zuma, forced to resign in February by his own party, appeared in court to face charges over a $2.5 billion arms deal. The next day came an even bigger blow: Luiz Inácio Lula da Silva, Brazil’s former president and current front-runner in polls for October’s presidential election, began serving a 12-year jail term on corruption charges — in a federal police building he himself inaugurated more than a decade ago.

Lula is a casualty of what may be the largest corruption scandal ever. An octopuslike bribery scheme carried out by the Brazilian construction giant Odebrecht has spawned investigations in more than a dozen countries, implicating leaders from Chile to Colombia, Mexico to Mozambique. (The scandal has also led to a $3.5 billion fine levied by the United States Justice Department against Odebrecht and inspired a new Netflix series.) In Peru alone, three former presidents are facing trial or serving jail time on Odebrecht-related charges.

With the crisis still metastasizing, it was hard not to be cynical when, in mid-April, the region’s presidents gathered in Lima for the Summit of the Americas to deliver high-minded speeches on this year’s theme: “Democratic Governance Against Corruption.” Donald Trump skipped the meeting, sending Vice President Mike Pence in his stead. It was a measure of the speed of these unfolding scandals that the White House couldn’t keep up. Pence’s official schedule initially included “a banquet hosted by President Pedro Pablo Kuczynski of Peru.” The only problem: Kuczynski was forced to resign three weeks earlier, one day before he was to face certain impeachment on corruption charges.

Behind all these grim headlines, however, lies a larger and more encouraging truth: Corruption is being exposed, denounced and prosecuted more vigorously, and at higher levels, than ever. In Latin America, at least, these are not just momentary flare-ups at the scandal du jour; they seem to be the rumblings of a historic shift. “Judges, journalists and the public now have the strength to take on high-level corruption,” says Kevin Casas-Zamora, a former vice president of Costa Rica and senior fellow at the Inter-American Dialogue. “It’s not that corruption is getting worse or better, but that societies are more willing and able to uncover it.”

Corruption, of course, is an ancient temptation. Aristotle pondered its significance back in the 4th century B.C.E., around the same time the Indian philosopher Kautiliya enumerated the “40 ways of embezzlement.” Throughout history, there has been a spirited debate about whether corruption acts like “grease” (smoothing the way past red tape) or “sand” (clogging the system with unproductive costs and scaring off investment). In the 18th century, the Anglo-Dutch economist Bernard Mandeville contended, in his “Fable of the Bees,” that private vices by the “dextrous management of skilful politicians” could be turned into “publick benefits.” More recently, some academics have argued that corruption can serve as an economic lubricant in societies that have low levels of trust, weak legal institutions or feckless governments. As the political scientist Samuel P. Huntington wrote: “In terms of economic growth, the only thing worse than a society with a rigid, overcentralized, dishonest bureaucracy is one with a rigid, overcentralized, honest bureaucracy.”

The “sand” argument, however, has gained far more traction in recent years. “At this point, the evidence is fairly settled that corruption is a drag on long-term growth,” Casas-Zamora says. The World Bank estimates that bribes siphon off around $1.5 trillion from the global economy each year — about 2 percent of world’s gross domestic product and 10 times the value of overseas development aid. Much of that money, the bank says, goes into the pockets and foreign bank accounts of elites rather than into the public investments — schools, courts, hospitals, roads — that are needed to lift economies over the long haul. By degrading social norms and civic virtues, not to mention the rule of law on which investment depends, corruption rots the foundations of a healthy economy.

For citizens in the developing world, this is not an academic debate. They see the costs of corruption every day: in shoddy public services; in “public servants” suddenly driving luxury cars; in small businesses pushed into the informal economy out of fear that taxes and laws will be unfairly applied. Corruption is, in effect, a regressive tax. According to the World Bank, poor families in developing countries often spend twice as much of their income on bribes as high-income families. As the World Bank president, Jim Yong Kim, put it: “Every dollar that a corrupt official or a corrupt business person puts in their pocket is a dollar stolen from a pregnant woman who needs health care; or from a girl or a boy who deserves an education; or from communities that need water, roads and schools.” He concluded: “In the developing world, corruption is Public Enemy No. 1.”

Just a few years ago, Peru was growing so fast that it was considered, with Mexico, Chile and Colombia, one of the “Pacific Pumas.” But the collapse of commodity prices hit hard — Peru depends heavily on mining — and the Odebrecht payoffs in exchange for major infrastructure projects laid bare the country’s vast inequalities and injustices. Corruption has plagued Latin America since the days of colonial occupation, but in this case, the cure hurts almost as much as the disease. The Odebrecht scandal has paralyzed construction ventures across Peru, says Eduardo Dargent, a political scientist at the Pontifical Catholic University of Peru, “but it is also making the government more prudent for new public investment projects.” It’s bitter medicine, but if it helps Peru begin to overcome its culture of corruption, the economy will be far healthier in the long run.

Back in the 1990s, when I lived in South America, Brazilians used a common refrain, often delivered with a shrug of the shoulders, that captured their tolerance for corrupt leaders: “Rouba mas faz” — roughly, “He steals but he gets things done.” That passive acceptance is disappearing fast, in Latin America and around the world.Part of the change is demographic: Over the last decade, Latin America’s middle class has grown by roughly 40 million people and now outnumbers those living in poverty. The middle class wants more than jobs or survival, more than “rouba mas faz.” As taxpayers, they want honest government and are no longer willing to overlook abuses of power. With the help of another new phenomenon, the mobilizing power of social media, this rising middle class has led the anticorruption charge into the streets, not just in Lima, Bogotá and Guatemala City but also in Baghdad, Bucharest, Tel Aviv and beyond.

A central driver of the anticorruption movement is a young generation of judges and prosecutors armed with greater independence and, in some cases, tough new transparency laws. Many countries in Latin America have adopted stricter accountability laws in the last two decades, though only Brazil has tested them effectively. Sérgio Moro, the lead prosecutor in Brazil’s biggest corruption cases, has leaned on two other new tools, plea bargains and whistle-blower protections, to persuade underlings to testify against top bosses and leaders, including Lula. “Twenty-five years ago, there were no rules, no conventions, no jurisdictions against corruption,” says Delia Ferreira Rubio, chair of the global anticorruption group Transparency International. It’s the collective responsibility of governments, civil society and businesses, Ferreira Rubio says, “to ensure that impunity does not prevail.”

After an earlier wave of corruption scandals led to the fall of presidents in Brazil and Peru, daily life resumed, and corruption only worsened. Will this time be different? The social and legal progress over the last 20 years may signal a tectonic shift. But corruption fights back, too. In some countries, threatened elites are trying to curb civil society, weaken prosecutors and attack the press. Even top prosecutors say corruption cannot be rooted out with only court cases, even ones that break the spell of impunity. The goal is to build “systems of integrity” throughout society. And that requires commitment greater than the platitudes emanating from the Summit of the Americas. Such a prospect may be years, even generations, away. But the biggest psychological obstacle may have fallen already. As Casas-Zamora says, “The sense of fatalism about corruption is disappearing.”